Now that everyone has had some time to play around with the new Samsung Galaxy S9 and S9 Plus, we are starting to hear more in-depth reviews. Let’s take a look at the features getting the most attention.

The S9 and S9 Plus include improved biometrics. TechRadar.com is  “incredibly impressed with the upgrade Samsung has brought with the biometric unlocking of the Galaxy S9 – the idea to fuse all the options together is a really neat one.”

The TechRadar team must have loved the S9 Plus as well, because it was awarded “Best in Show” at the MWC 2018 Awards. “The Galaxy S9 Plus is easily the best phone at the show here – Samsung might not have brought a huge upgrade to its previous models, but they were already so far ahead of the pack in many ways that it didn’t need to.” Not to be outdone by its big brother, the Galaxy S9 was awarded the Best Performing Smartphone Display Award by DisplayMate.com. In giving the S9 screen its “highest ever A+ grade,” DisplayMate found the color accuracy is “visually indistinguishable from perfect.” Fortune.com agrees, saying the S9 has “the best-looking screen you can get on a smartphone.”

The new Samsungs have some fun features as well. If the iPhone X’s Animoji wasn’t your thing, the S9 and S9 Plus come with the AR Emoji. Like the Animoji, the AR Emoji captures your likeness using the camera. And while TheVerge.com writes “the tracking isn’t nearly as precise,” it is a person and, so, will solve the problem of your not-quite-right Bitmoji.

An obvious improvement on both the S9 and S9 Plus is the repositioned fingerprint scanner. It is now below the camera, rather than to the side, “which should,” according to The Verge, “make it much easier to use, especially on the larger S9 Plus.” Unlike the fingerprint scanner, not all features of the new Galaxy phones are alike. The Verge found it interesting “how there are more things different between the smaller S9 and larger S9 Plus this year, which might make it harder for those looking for a compact phone with all of the bells and whistles.” 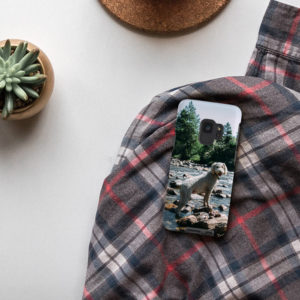 If you are in the market for a new Samsung, it is worth a look. You will be dropping a pretty penny to enjoy the new features, so make sure to keep your device protected with a custom Samsung Galaxy S9 case or S9 Plus case. Make it yours and emblazon your personalized case with your new AR Emoji or a pic of your pup…whichever suits you.

We recommend you visit your local site for the most relevant content and information.